Coronavirus: Some of Ghanaians’ biggest worries

Having to live with the knowledge that a fast-spreading pandemic is close to you, having heard some assurances and measures taken by the government and yet still finding so many loopholes, and questions to ask; well now, that’s the current situation of many Ghanaians who are still trying to come to terms with the importation of the new Coronavirus into the country.

Ghanaians have particularly been on edge after government’s announcement of some six confirmed cases of the fast-spreading coronavirus. Just Tuesday, an additional confirmed case was announced on the country’s official page for updates on the pandemic; https://www.ghanahealthservice.org/covid19/.

Many have however taken some solace in the interim measures government has announced and begun undertaking, to ensure the situation is under control.

The move which has been touted as a great one by many took effect from Tuesday, March 17. There seems to be questions however emerging, among some sections of the populace.

First about how the 100 million dollars released by the government, how and where the money is coming in from, and details about the dissemination of that money is one of the questions that have emerged. Some Ghanaians took to social media to throw questions at that the president. 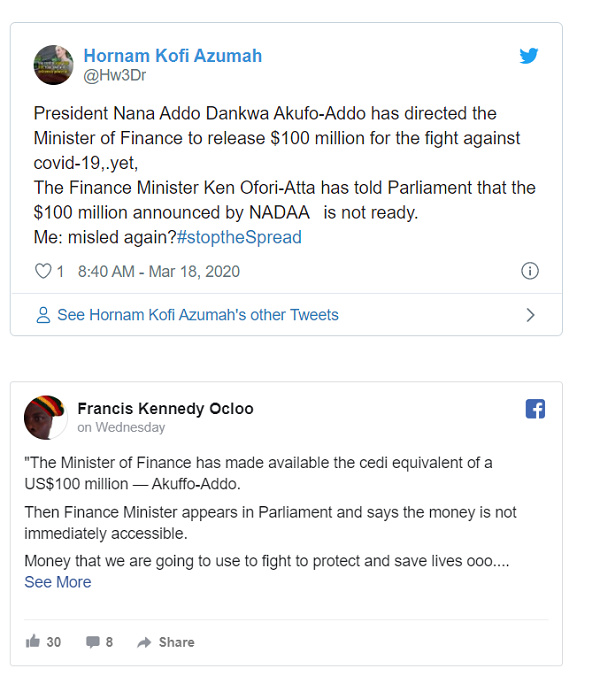 The issue of self-isolation is another measure Ghanaians are raising questions about.

Self-isolation is one of the government’s directives for Ghanaians who are entering the country from any of the countries with recorded cases of the virus. According to the directive, “There will be a mandatory 14-day self-quarantine for persons who are otherwise allowed to enter the Ghanaian jurisdiction.”

While this is undoubtedly a move in the right direction, it leaves questions about how this is going to be monitored (how do you strictly ensure it is done) and how effective it will be especially in cases where the individuals live with others in proximity. 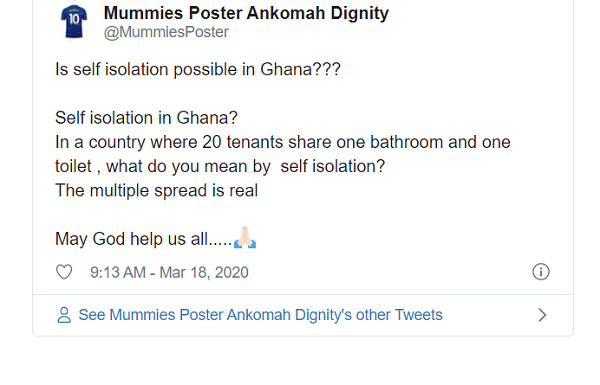 Concerns have also been raised about how communication about the travel ban is being disseminated such that airlines are still allowing persons from the other affected countries who ultimately have had to be refused entry and sent back to their homes.

In the most recent case where some two Italians were refused entry, there were questions about the people they may have come into contact with, who also may have been on the plane.

Nose masks and gloves have been in use by many Ghanaians since the government’s confirmation of some cases in Ghana.

There, however, have been suggestions that these gears, which are supposed to be used for safety are being used exaggeratively, wrongfully and for the wrong purposes. Education about this is low, though some health experts have, through the media explained the rightful use of the gears; to be used mainly by health personnel and persons with symptoms.

People are still seen moving around with all sort of coverings as substitutes for these nose masks and gloves are used by people continuously instead of disposing them.

The concern of many is that the low education on this subject will merely end up worsening the situation and creating more chances for the spread of the disease. Meanwhile, the main institution responsible for civic education on such national issues; the NCCE, says it is still waiting for a confirmed budget from the government to be able to work effectively.

Government, prior to the confirmation of the very first two cases, announced the release of some $100 million budget allocation for the fight against COVID-19, monies president Akufo Addo says will be used for infrastructure expansion, purchase of materials and equipment and public education.

Barely a day after, the confirmation of the first two cases followed. Then two other sets on Sunday; making 6 confirmed cases altogether. A 7th confirmation followed on Tuesday, March 17, 2020.

The Information Minister, Kojo Oppong Nkrumah, during Sunday’s statement, announced some travel bans including the closure of the country’s borders and airports to entrants from countries with records of over 200 coronavirus cases, a mandatory 14-day self-quarantine for Ghanaians who are otherwise allowed to enter the Ghanaian jurisdiction, and a quarantine process for persons who enter the country with exhibits of any symptoms of the virus.

Hours after this, President Nana Addo Dankwa Akufo-Addo, in another live broadcast imposed some bans on public gatherings, schools, religious services, festivals, political rallies and funerals, among others.

I feel sad for Rev. Obofour over the death of his church members – Computer Man

2022 Budget: Call 1000 press conferences if you like – Sam George to Majority

Thoughts of a Nima boy: How to be a good reader, a lecture to the Baraarug library of Somalia