He sued the social media commentator in a US court

According to excerpts of the writ published by Presidential Staffer, Charles Nii Teiko Tagoe on his Facebook timeline, the MP is seeking an injunction prohibiting the defendant from publishing on any media outlet, any defamatory remark about him.

He is also demanding an apology from the defendant via the medium used in defaming him and compensatory damage, including economic and non-economic damages of at least $9,500,000.000.

The MP had earlier hinted that he would sue the US-based Ghanaian journalist for alleging that he (Agyapong) murdered Ahmed Hussein-Suale, an investigative journalist and J.B Danquah Adu, a fellow MP.

In an earlier report, mynewsgh quoted an online TV interview of the MP, where he explained his purpose of being in the States in September 2021.

“I am taking him to the court because I want him to come and prove with evidence where he saw me killing the persons, he claims I’ve killed. He is bragging about writing to the Congressman and has also written to the Worchester Mayor that I killed Armed Suale and J.B Danquah. The guy should come and prove, it is simple,” Kennedy Agyapong said.

UNITED STATES DISTRICT COURT FOR THE EASTERN DISTRICT OF VIRGINIA

a. Injunctive relief prohibiting Defendants, and each of them, from posting on any media outlet any further defamatory remarks, per se or otherwise;

b. An apology from Defendants’ via and through the same channels Defendants used to defame Plaintiff including LSM social media platforms and email correspondence sent to individuals, including the mayor of Worcester.

e. Attorneys’ fees, or consideration of such fees in determining punitive damages, costs, of this action and disbursements, to the extent permitted by law. 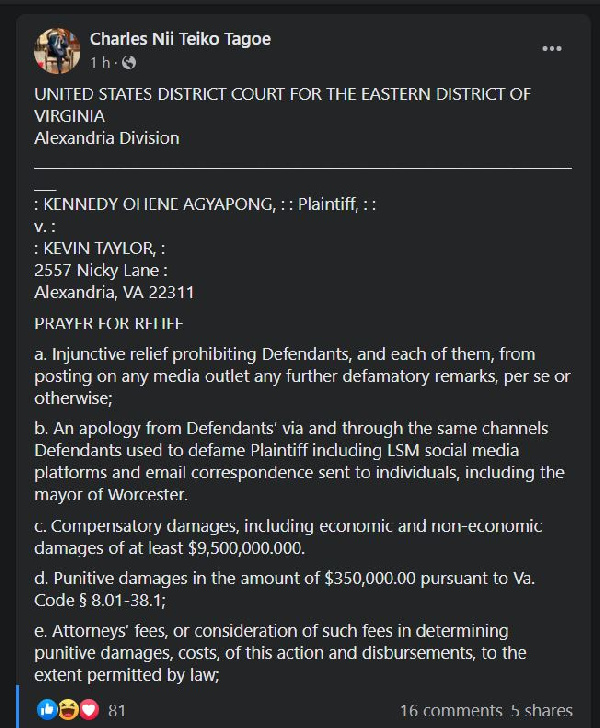 ‘Pastor was convicted to pay a fine, not jailed’ – Police ‘schools’ Mahama

Special Voting: EC not responsible for missing names on voters register in Kumasi